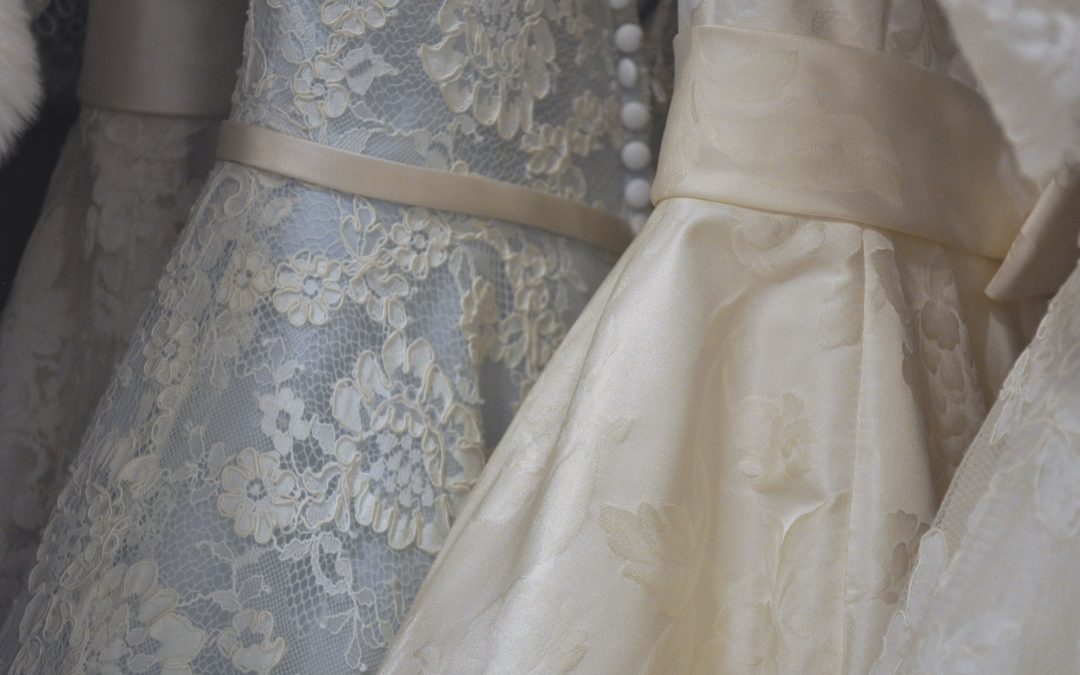 As time has progressed and styles have changed, so have wedding dresses. New styles come into fashion and people are often influenced by what their idols are wearing. Let’s take a step back and see how wedding dresses have changed – while what they represent has always remained the same.

At this time the typical wedding dress had an S-shaped corset that cinched in the waist and pushed up the bosom. The way the outer dress was designed also helped accentuate the figure by having frills on the bodice. Gigot sleeves (also know as leg-of-mutton-sleeves due to the resemblance to a sheeps hind legs, are wide at the top and narrow at the wrist) were often a popular choice for wedding dresses in the 1900’s, along with high collared necklines, and long trains. The dresses were generally accessorised with long gloves, and hats that had a veil attached.

During this time Queen Victoria’s trend-setting white wedding dress was still the height of fashion. However, due to the money involved in keeping a white dress white, it was usually only worn by affluent people. Alternate colour choices at this time were azure, mauve or pale pink.

The 1910’s introduced a softer dress style that had a more flowy skirt compared to the fuller ones of the 1900’s. This was believed to be the style of choice as it allowed brides more movement to dance (tango, turkey trot, or hesitation waltz), which was becoming more popular. During this time the waistlines on wedding dresses began to rise and trains were getting shorter. Ruffles became a thing of the past, as more brides ditched the style and opted for dresses with bretelles (a pair of non-structural straps that go from the belt on the front of a dress to the shoulder, sometimes continuing to the reverse of the dress) and intricate lace detailing instead.

Another significant change were the sleeves. Gigot sleeves were less popular as more brides were adopting a sleeker close-fitting sleeve, with slight fullness at the sleeve head. In addition, the sleeves were often short or to the elbow, compared to the full length sleeves of the 1900’s. Following the airy and flowy dress style, veils also became more floaty with less material used, typically taking on bonnet or cap-styles.

Post WWI saw the evolution of the roaring 20’s, where not only did wedding dress waistlines drop, so did the necklines. Straighter, streamline dresses were all the rage with a shorter length, typically stopping on or below the knee. This made it easier for dancing to the ever growing jazz-style music.

In this decade brides typically wore a dress that had embroidery, beading, and a swing hem. Veils like those worn in previous years were less popular with the 20’s brides, instead they opted for a cloche hat, or Juliet headdresses. It was during this decade that veils were introduced as being longer, flowing into the train of the dress.

With the depression-era came not only changes in the styles of wedding dresses, but also the material many dresses were made from. Many women reverted back to a longer hemline that reached their ankles but did not touch the floor, and was made from radon rather than silk, as radon was much more affordable.

Due to the financial hardships during this time many women would purchase a dress they could later dye and wear again. However, for some women buying a new dress wasn’t a possibility, so they would wear the nicest dress they already owned which was typically a floral print and fell between the calf and ankle. Veils were still worn during the 1930’s, although the style did not change from previous years – most brides typically wore hats rather than veils to accompany their dresses at this time.

Wedding dresses were hard to come by during the war, so brides either wore the nicest dress they already owned, wore their mothers wedding dress, or made a new dress from furnishing fabric. Whichever option was chosen, the dress style of this time had rounded shoulders with gathered sleeves, a corset waist, and padded hips to accentuate the hourglass figure. Veils were generally very simple and often attached to a favourite hat.

Alongside the physical style of the dresses, they also needed to be practical for the time. The skirt was typically short to allow the bride to ride a bicycle, and the jackets worn could be buttoned up to the neck to give warmth.